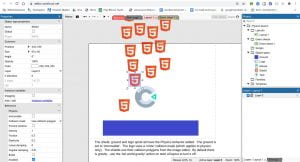 What I am doing is really just learning all the different pieces of Construct 3. Especially right now I am just looking over the physics right now and learning how that works. From what I have learned so far it’s pretty basic and straightforward and I feel as if I should be able to get a hang of it very quickly if I need it for a later project. Some other things I have been doing is looking at what kind of art styles work better than others and how simplicity can make a game amazing or trashy and how you have to walk a thin line.

My goal for this kind of just researching is to improve on the overall feeling of the game. As from personal expirience the feeling a game gives off can almost be more important than the actual gameplay because if it feels good just to walk around then it can make up for kind of weaker gameplay, for example you could have a big boss fight without any kind of special sounds or scenery change and yeah it’s still gonna be a boss fight. But you could have just a basic enemy and give it a wild arena and like super hyped up music and it’ll feel like as if it was a boss fight even though in the end it’s just a basic enemy that you see all the time.

Right now I am in preproduction trying to figure out how I can make a game that feels good even with limited expirience and resources, and make an enjoyable expirience. Next week I will start out with actually making a game, figuring out exactly what I want then making art, some sketches of what I want stuff to look and feel like, what mechanics I want and how to implement them and hopefully get into the actual production of this project